In Seattle, we ate at this sushi place that had sushi coming around on conveyor belts. You choose your sushi and you pay by the plate. All of these plates only cost us $28! 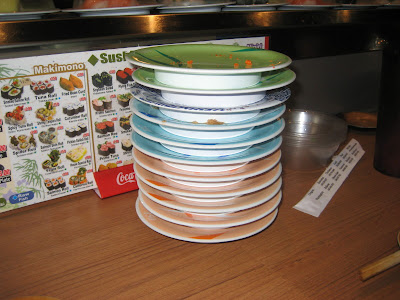 Some enterprising soul should put one of these by every college campus. Especially because it would promote ethnic diversity --almost all of the workers in this Japanese restaurant were Hispanic.

This is a gratuitous picture of my handsome husband driving me around. I had many opportunities to take pictures like this because we spent a LOT of time in traffic. Seattle is a traffic town--they even have traffic updates on the weekends and at night!

(Plus, you know, turn about is fair play--you know he's always taking pictures of me when I can't defend myself. Or, um, duck.) 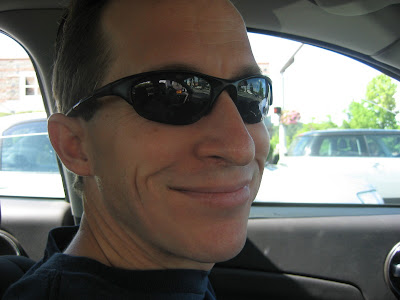 One of the highlights to our trip was going down to Pikes Market and seeing the fishmongers tossing the fish around. This was a big crowd pleaser. 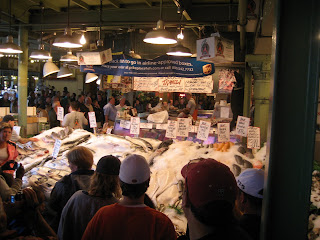 Look at this bouquet of flowers. In Austin, this would have been at least $45. At Pike's Market, it was only $15! I had to buy the hostess of our dinner that night an enormous bouquet of sunflowers because it was only $5! 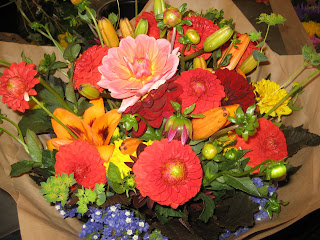 So, the reason there are pigs all over Seattle is that there is this big brass pig at the entry to Pike's Market. It's a landmark. (I have no idea who that guy is. He walked into my picture like a big bottle of Soft Scrub With Bleach. 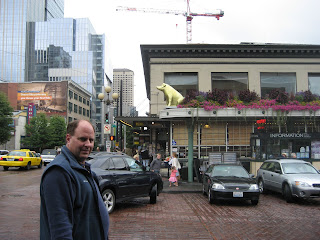 And here are a few extra pigs just because it's amazing what creative people can do with a few pig sculptures. 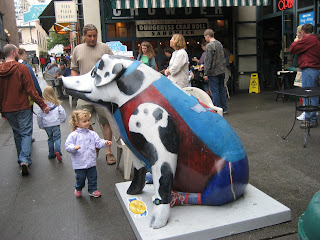 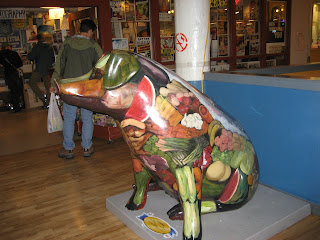 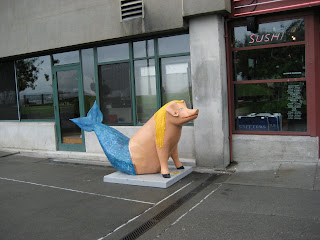 Here I am in a cafe having the best clam chowder of my entire life. 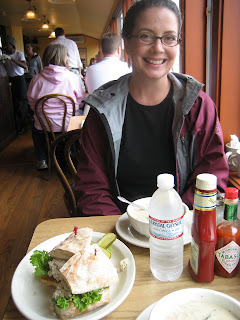 And here is my husband at the REI flagship store, which is bigger than a few cities I could name. I think we only saw about a tenth of it before my foot gave out. Apparently, there's an entire mountain biking trail on the premises but we didn't find it. 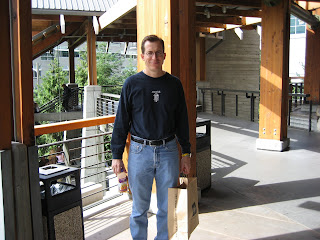 Anyway. That's my little jaunt to Seattle. We had a great time. I was telling my husband how I'd forgotten how much fun it was just to hang out with him. Like, with no agenda or weighty topics to discuss. Just to make jokes and tease each other and talk about... stuff. Here, don't we look like we're having a great time? 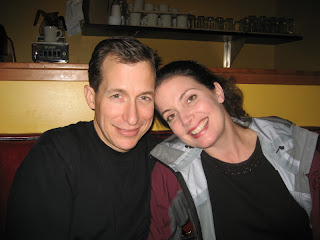 And it's not even Love Thursday! (Which is a good thing because I discovered there is a different way to post blogs on Blogger, using the, HELLO, compose feature. Apparently I am doing something wrong though, because it kept eating my pictures so I ended up having to re-upload all of the pictures in this entry about four times.

I would like to state for the record that, yes, I used a filthy word at one point but no children were in my house at the time so it doesn't count. Which I think is a long asked philosophical question: If an expletive falls in the Cooper household with no children to hear, does it warrant an R rating??
Email Post
Labels: A picture is Worth at Least Ten Words humor pigs summer travel

Anonymous said…
When I was between the age of about 5 and 12, my best friend was a Chinese girl named Deanna. Her parents would take me out a couple of times a month and my favourite place was this chinese food restaurant where they walked around with the food on plates and you just picked from the trolly what you wanted. Then they counted your plates at the end of your meal. We use to spy on people hiding their plates under their chairs and inside their coats so they wouldn't be counted! I would love to go there again but for the life of me, I've never been able to find it again.

Anonymous said…
Okay, the conveyor sushi thing is fascinating. Glad you had such a nice trip and you and hubby look so great together. Maybe it's the post-REI bliss in his eyes....
August 22, 2007 at 7:33 PM

Lynda said…
When we get laid over in Seattle, one of our favorite things to do is to go to Pike Street Market. It's not just the market building, but the whole of Pike Street and the shops that line both sides that are great to wander through. Like you, we had to go to the flagship Starbuck's store, although we really like the Big Foot coffee huts that sit everywhere, and the flagship REI store. Isn't it great. I'm sorry that your foot gave out and you weren't able to wander more, that kind of bites.

Anonymous said…
Sorry Lynda, but when I read your comment I had to laugh because my "R-rated" mind punctuated your first sentence in a very different way from, uh, flying. (I had no idea Seattle was such a "lucky" city, if you get my drift. Wink wink, nudge nudge, say no more, say no more.)

Barb, just as one of those weird coincidental things, my next door neighbor is an artist and created one of the piggies..."Fortunate Swine", located outside a jewelry shop, of course! She is gold colored and covered with "fortunes," and is wearing a tiara (something no woman should be without, imo.)
August 22, 2007 at 9:55 PM

Barb Matijevich said…
Oh, you guys! Your comments are always so much better than my blog! I laughed out loud over the punctuation of "When we get laid (COMMA)over in Seattle." (Hey, Em, I SAW that piggie. But couldn't get the camera out in time to Kinnear it. I love a good tiara.) And I do think that all pigs should have tails like mermaids --it would make their ridiculous little tails look so much more dignified.

Anyway, thank you all for the laugh. I've had my morning (home-made! No Starbucks!) espresso. Can you tell???