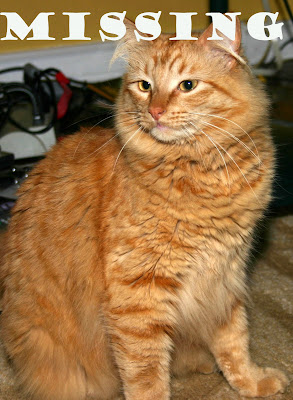 I'm very sad but have not yet given up hope that someone might have found him. He has a microchip.

It doesn't help that I feel totally responsible. He was sick for a day or so and hid under Ana's bed. I called the vet and while I was waiting for her to call me back, I had to leave to pick up the girls from piano lessons. I just let him out as I went out--like the huge honkin' dumbass that I am. So, that was 1:30 yesterday and I've not seen him since. And he's just really a homebody. He's never been gone this long before.

So, not only is he gone, but it's MY FAULT for being so stupid. I could be force-feeding him pills right now if I hadn't let him out.

And my biggest fear is that he has a urinary tract infection (mostly fatal in male cats) or that he was so weak (as far as I know, he now hasn't eaten in at LEAST 48 hours) that some wild creature got him. Or that he's lying somewhere with the life oozing out of him and I'm wandering up and down the street yelling, "EDWARD!!" because, as you know, cats so often come when they are called. I'm not even sure he knows his name.

You know, I keep calling this the Summer of Bickering but I think maybe it's the Summer of Pet Stress. My two favorite pets... honestly, why do I set myself up for this? I always think that it's no big deal-- I have an infinite amount of love. I forget about the pain inherent in loving a living creature. Honestly... I can't believe that I am doing this AGAIN.

The last time I loved a cat like this was in the eighties. I had this jet black, saxophone-playing kitty named Coltrane who had, really, the exact same personality as Edward. My job had me traveling about 90% of the time so I asked my ex to take care of him while I was on the road. He told me one day that he thought Coley had been hit by a car. Again, we don't know for sure, but a neighbor saw a black cat get hit. I am STILL mourning that cat and it was almost twenty years ago.

So, I finally took a chance on another cat (my husband's cat doesn't count since the only time she really loved me was right before I was about to get incredibly sick. She would come and lay on top of me as I was going to sleep and I'd just know that malaria or LEPROSY or something equally dire would set in the next day.) and here I am, up at all hours looking for him and crying off and on all day.

If you are a praying person, would you pray that my Eddy V is safe and not in pain? I mean, if it was his time, then it was his time. But what's making me crazy is thinking of him sick or hurt somewhere and me unable to find him.

Anonymous said…
Don't give up yet. Cats are afterall cats. I don't know how many times I've thought that our little wanderer was gone for good and then she'd come home 3 days later. Thinner and dirtier but fine. My sister's cat was missing for 2 or 3 days a couple of months ago and she was absolutely beside herself. Turned out, he got locked in somebody's garage while they were away. Ask people in the neighbourhood to check their garages for you. Expecially if he was really sick, he went looking for a quiet place.

Suna Kendall said…
I've been thinking about you and the kitty all day. I had this happen to me only a couple of months ago, and I still miss my Seamus.
August 10, 2007 at 3:54 PM

Anonymous said…
What a gorgeous cat. I agree about asking neighbours to look in garages, sheds etc. I have sometimes seen notes on trees etc asking people this. Our cat went missing from the cattery in the middle of the countryside while were on hols. After 10 days we found her due to having told lots of people she was missing and please to keep a look out. Someone on a neighbouring farm to the cattery spotted her in their garden and got in touch. Good luck with your boy and I hope you find him soon.
August 10, 2007 at 5:05 PM