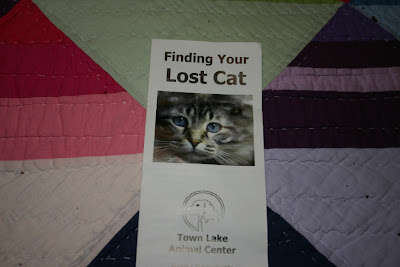 I'm sorry for all of the typos in that last post. I could go back and fix them now but I am still marvelling at how the whole story played out as I was blogging. I think that's one of the beauties of this medium --it allows the chronicling of life as it happens.

(I guess it also allows chronicling of what a terrible typist I am. I'm getting better with all this blogging, though!)

Quick recap: My kitty Edward was ill and went missing for more than 48 hours. Because he was sick, and because he's such a homebody (as in, has never been gone for more than a few hours), I feared the worst. We combed the neighborhood and the woods behind our house and we put up signs and we tried not to lose hope.

I was pretty much beside myself. I know that it is neither healthy nor normal to get so attached but I also don't know how NOT to do that. If you know, give a shout, would you? Because I'm pretty sure my husband would appreciate it if I wasn't always thisclose to driving off a cliff with Louise.

(That's another thing I love about blogging--you can link to sites that explain your obscure references. And since my popular culture references are all from the late 80's and early 90's (which was the last time I paid any attention to popular culture or even, you know, watched an entire movie) I feel like this is a service I should provide to my readers.)

Anyway, I couldn't eat and I couldn't sleep and I had decided that I had to stop obsessing over Edward because I was totally mental and becoming more so by the minute. I was just so, so sad.

So, what I tried to do was to just give it up to God because there was nothing more I could do.

Um. I might have tried to make a few DEALS with God that involved things I was willing to do in exchange for the safe return of Edward, like not drinking so much wine and cleaning my craft room and playing Polly Pockets with Jane when she asks... but mostly, I just prayed that he wouldn't be in any pain or fear.

I was sitting on the couch writing about all this when I heard the shout from the back of the house. My husband had taken one last look under the back deck, and through some miracle, Edward was there. I don't know how he got there because he wasn't there earlier and he's a sick cat, a really sick cat, so it's not like he'd been scaling fences, etc.

We brought him inside and called our vet, even though it was after seven o'clock on a Friday night. (I'm really glad I can't go back and hear what I said on that message because I was SOBBING. Sobbing, I tell you.) She called back and said she was on her way --all the way from way North of the city (we live South). She got to our house at 8:00 and after a brief exam, she said it was her professional opinion that we needed to take him in to the emergency clinic, where they could do x-rays, etc. She was afraid he might even have been hit by a car because (I hope you're not reading this over breakfast) there was some anal bleeding. So my husband loaded him up and took him and I honestly tried to give Dr. Wyatt my VAN. Seriously, she'd had some car trouble and was driving a rental and she needed to go to Louisiana and I told her to PLEASE, TAKE MY VAN. More about Dr. Wyatt in my next post.

My husband took Edward to the clinic and called back after an hour or so to say that it turned out that the little guy had some intestinal blockage and would be staying the night and having several enemas. No surgery. No drugs. My cat is going to be fine.

I just can't believe it.

It's dawn now and my incredible-in-every-emergency spouse has gone to go get the cat and bring him home. I'm sitting here blogging and hoping you can feel my gratitude for your support and prayers and love. This is the biggest blessing of all --I cannot believe how rich I am in the kindness and care of good people. Thank you--THANK YOU! If y'all lived closer, I'd probably try to give YOU my van...

And here he is: 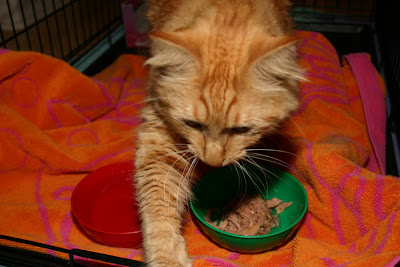 I am so, so grateful.
Email Post
Labels: blogs Coop deep thoughts humor joy pets small things summer what makes a life Why I Totally Could Rule The World

Damsel said…
Is that TUNA in that bowl? Because that's so exactly what I would have done with my cat had I lost one of them. Spoil them ROTTEN when they get home.

Oh, I'm so glad he's home and okay! Oh, hooray! Hooray!! Give him a good scratch behind the ears from me. I knew he'd come home!!

Maggie, if she were there, would give him a thorough face washing with her big doggie tongue. Um, you don't have to pass that one on, though...

Your vet totally deserves a good scratch behind the ears, too. Wow.

N. Maria said…
I am so glad Edward is home and that it is going to be an easy fix at the vet!!!
I cried when I read about him missing.
You sound very lucky to have such a calm hubby at times like that. I'm impressed.
I am also so glad you blog. You have a great way of expressing yourself - it's always a good read.
August 11, 2007 at 1:33 PM

Anonymous said…
Great story! Don't be too surprised if he really did climb over a fence. My cat went missing once, got hit by a car, and climbed a six-foot privacy fence with a leg that was literally dangling from her body (and was of course amputated). The vet expressed concern about my children dealing with a three-legged cat because it would look weird and suggested putting her down. WTF?!? No way. My brave baby is still here with us, albeit with three legs, seven years later. So with cats, you just never know. :-D
August 11, 2007 at 2:03 PM

Tiffany said…
Is that a current picture? Because, you know, a lot of us would like to see the cat POST-trauma, just to...you know...make some kind of visual confirmation of his well-being. Do you have a date and time stamp on your camera, by any chance?
August 11, 2007 at 3:00 PM

Anonymous said…
Hi Barb, so glad he's home and that he survived his ordeal. And that you did, too.

(That's so funny about your van!)

Anonymous said…
That just totally made my night! I'm so glad for you and I loved the T&L reference. I would have been like that with my little Josie, who is canine rather than feline, but you know the deal.
August 11, 2007 at 10:04 PM

Suna Kendall said…
I was gone over the weekend and hadn't been able to check blogs. I am so relieved to come back to good news from you. I was thinking about Edward over the weekend.
August 13, 2007 at 9:42 AM